Election day has ended peacefully with considerable procedural issues and a number of serious violations. 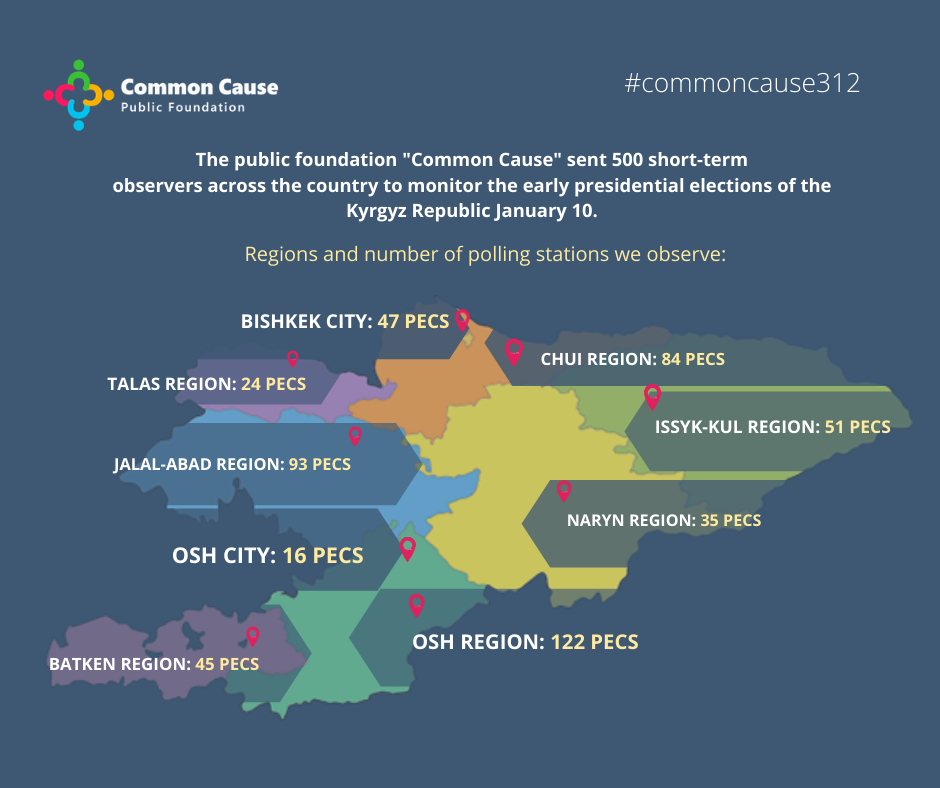 Voting at the early presidential elections in the Kyrgyz Republic has ended peacefully with considerable procedural issues and a number of serious violations.

The voting process was observed by 500 observers across the country. The Public Foundation Common Cause uses Statistically Based Observation (SBO), an advanced election observation methodology that enables conclusions representative of the entire country to be drawn about specific electoral processes on Election Day. In addition, 58 mobile teams observed the situation outside of 535 polling stations until 20:00.

As of 21:30, 55 serious violations have been observed (cumulative total data):

Illegal restriction of the rights of observers (resolved) - 4:

Presence of unauthorized persons within the PEC- 2:

Violation of the secrecy of voting - 5:

Voting in place of another voter - 1:

Ballot boxes not shown to be empty - 1:

Refusal to provide a copy of the manual counting protocol - 1:

The Call center in Bishkek with 20 operators is receiving and analyzing information from observers, while 13 lawyers are engaged to analyze information about the reported violations, and file complaints.

On January 11, Common Cause will make a preliminary statement on Election Day and hold a press conference for media representatives at the Park Hotel at 13:00. Accreditation is compulsory.

The press conference will be broadcast live at: https://bit.ly/3io9emG

Aida Suyundueva - Chairperson of the Public Foundation "Common Cause»

Taalay Asylbekov – Adviser for the elections of the PF "Common Cause"

Raushan Sadyrbaeva – Project coordinator of the PF "Common Cause»