PF "Common Cause": A Look at the Proposed Models of Conducting Elections of Deputies of the Jogorku Kenesh of the Kyrgyz Republic 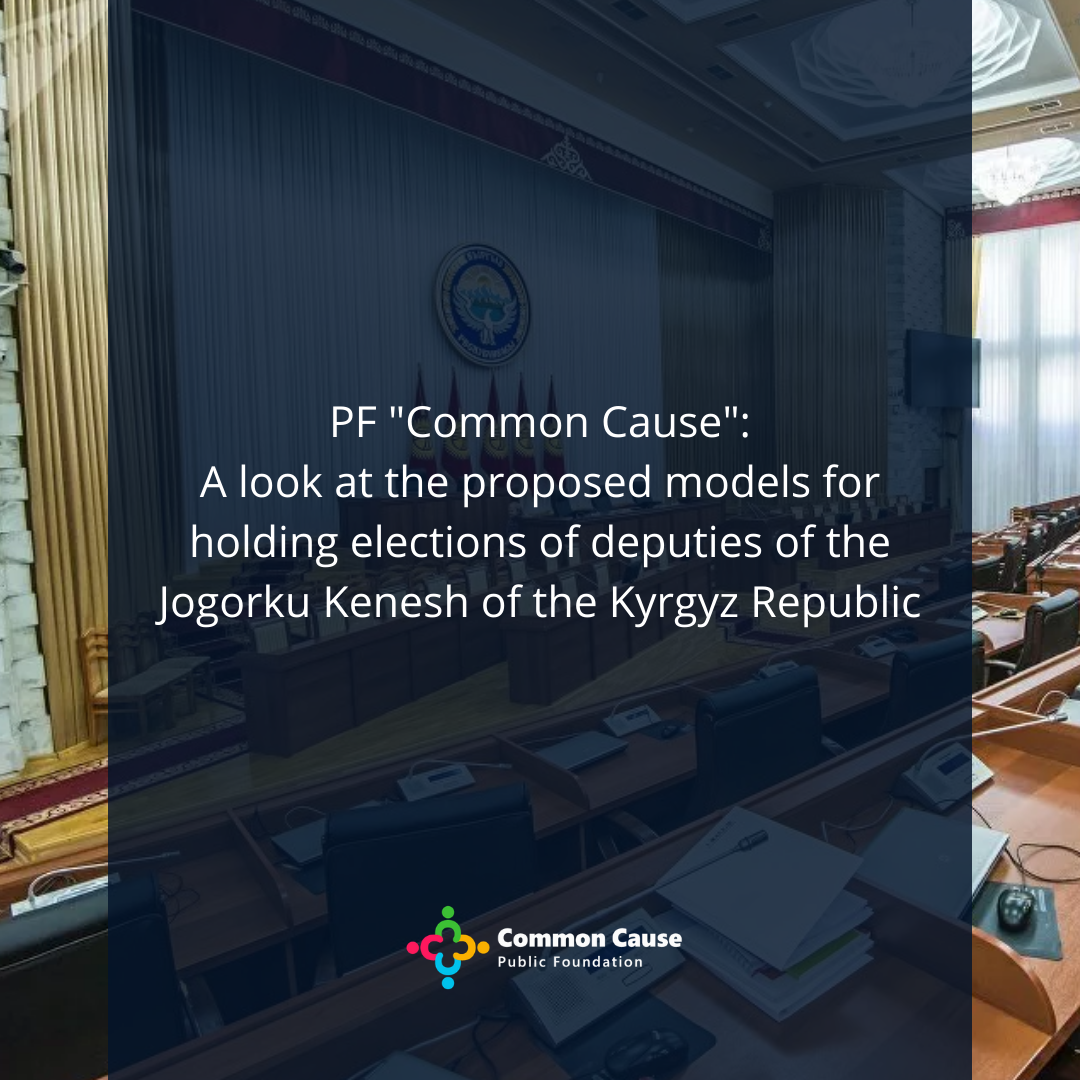 According to the Constitution of the Kyrgyz Republic approved in a referendum (nationwide vote) of April 11, 2021, Jogorku Kenesh - the Parliament of the Kyrgyz Republic, is the highest representative body exercising legislative powers and control functions within its powers, consisting of 90 deputies elected to a 5-year term.

The procedure for electing deputies to the Jogorku Kenesh is determined by the constitutional law.

The Common Cause Public Foundation (hereinafter - the Public Foundation), which conducts nonpartisan observation of the preparation and conduct of elections at various levels, having considered the electoral systems proposed for discussion, believes that each of the proposed electoral systems has its advantages, while the implementation of each of them may lead to side effects and controversial results.

The proposed option of the Interdepartmental Working Group responsible for improving the electoral legislation provides for a system of elections of deputies to the Jogorku Kenesh, in which the entire country represents a single constituency. On polling day, a voter has the right to choose both a political party and a single candidate within the political party's list. Thus, mandates will go to the candidates who have received a greater number of votes.

One of the problems that the population may encounter when choosing the mentioned system is that the introduction and successful operation of this system requires considerable time to train members of election commissions, because the vote counting procedure will be more complicated, due to the need to count votes both for each party and for each candidate within the party list. In addition, training should be conducted not only for election commissions, but in general for all participants in the electoral process, and in particular it is necessary to carry out wide-scale work with voters in order to give them a precise and clear understanding of voting procedures.

The Public Foundation notes that in conducting elections using the proposed mixed system of majoritarian and proportional systems with closed lists of candidates from political parties, a number of difficulties are likely to arise. Thus, initial difficulties may arise already at the stage of defining and approving the boundaries of single-mandate constituencies, as problems may arise with ensuring representation of the population of certain administrative-territorial units and it can create conditions for expressing dissatisfaction with the approved boundaries of single-mandate constituencies.

Furthermore, we consider it necessary to take into account the experience of elections under the majoritarian system in the past, when in the process of establishing the results of voting there were local conflicts between candidates and their supporters, legal disputes, which ultimately can lead to long periods of time for the formation of the new composition of the Jogorku Kenesh.

Also, with closed lists of political party candidates, there remains the influence of possible intra-party corruption on the quality of a political party's candidate list during the nomination stages and after the election day, depending on the personal preferences of the party leader and the financial situation of the candidates.

Conducting elections using the mixed system, in fact, means holding combined elections, in which it will be necessary to equip polling stations with ARBB equipment in sufficient quantity, which will ensure the procedure of separate voting both for candidates in a single-mandate constituency and for political party lists, as well as the possibility to replace ARBBs, if they break down and cannot be further used. In addition, the administrative workload on election commissions at various levels may increase significantly, which may ultimately have an impact on the quality of elections conducted by them.

Based on its analysis of the proposed electoral systems, the Common Cause PF notes that, in general, the proposed types of electoral systems do not ensure accessibility of the electoral process for candidates with insufficient financial status. In both systems, however, the likelihood of vote-buying and other violations remains high. In the end, all this may lead to the formation of an "oligarchic" composition of the Jogorku Kenesh.

In view of the above, the Common Cause Public Foundation does not single out a particular proposed electoral system, but notes that the decision on the choice of an electoral model for the elections of deputies to the Jogorku Kenesh of the Kyrgyz Republic should be made following the results of broad public discussion with all participants of the electoral process (voters, political parties, civil society and others) in all regions of the country.

Given the short timeframe in which the amendment of the electoral legislation is expected, a broad public discussion will help to decide on a particular electoral model that will evoke public confidence, reflect the interests and observe the electoral rights of all participants of the electoral process, ensure reliability, transparency and competitiveness of elections of deputies to the Jogorku Kenesh of the Kyrgyz Republic, as well as their legitimacy.